Many of continents have similar shoreline that a lot of us probably have noticed. It seems like they once were inseparable. Various facts support this idea. Mountain chains and rivers continue at the junctions of continents, for example Appalachian Mountains chain. Supercontinent also explains why animals could migrate from one continent to another. Actually, the existence of supercontinent Pangea has already been proven. But there is one thing that can destroy these beliefs: the continents cannot be connected.

I have long noticed the similarity of continent edges. I tried to piece them together, but I couldn’t do it. I found a lot of various reconstructions of Pangea. All of them were different and they didn't convince me at all. So, I decided to try to reconstruct it myself and finally found time to look into this matter. I’d like to share with you my observations, some conclusions and to show the resulting model of ancient Earth with supercontinent.

In spite of the fact that edges of Africa and South America are very similar, these continents could be connected together only along one of their sides.

They could be connected, provided that their surface was more curved. And that’s only possible if the radius of the Earth was smaller than it is now.

It turnes out that continents could connect together only on the planet with smaller radius. They simply could’t do it on the present Earth, having the current size.

My small experiment confirms the expanding Earth hypothesis. The reconstructed model of the ancient Earth was similar, with some differences, to the model created by Hilgenberg, O.C in 1933.

THE RIDGES — THE ANCIENT CONTOURS OF CONTINENTS

I wasn’t quiet happy with this model. I had to ajust some parts of the continents. In my opinion this model required further work and some confirmations. And then I got this confirmation.

Let’s have a look at the oceans. There are a lot of oceanic ridges which lie between continents. The Mid-Atlantic Ridge lies between Africa, South America and North America. And between Africa and Antarctica there is the Southwest Indian Ridge.

If we look at the ridges in Atlantic and Indian oceans, we will see obvious outlines of Africa, Madagascar, Antarctica. They are only increased by 2 times. If you look only at the ridges on a modern globe, you will see ancient contours of continents at a scale of 2:1. Thus, right on a globe we can observe ancient contours of continents, their shape and location and how they connected before and also the ratio of their dimensions to the Earth. You can see this.

It seems that the continents were previously connected along the ridges. And the ridges are the oceanic mountains that were formed during the separation of continents, and then increased during the process of Earth expanding. And the Earth continues its growth in these weak places.

The ridges lines show that the Earth has increased approximately 2 times. And this almost coincides with the data determined in the first case. This helped me to edit the previous model. And now the continents easily pieced together like a puzzle.

There is another fact that is now ignored. In the mantle, the temperature is very high, and therefore there must be enormous pressure. This pressure has had an ongoing effect on crust. It’s quite natural, that the crust once cracked, unable to stand such enormous pressure. This huge pressure once came out in the weakest places of crust, and had become mountains and ridges. These are places of higly seismic activity, and the expanding of Earth is still continuing here.

Taking into account the location of oceanic ridges, I edited my model and then made animation and some views of ancient Earth.

The size of continents has remained practically static, but their curvature has been changed and therefore they deformed. Also, their shape could change, and some parts of the continents could make a turn. Naturally, the larger the size of the continent, the more it could be deformed with changing its curvature during the Earth expanding.

Africa and India were initially parts of Eurasia. Eurasia, as the largest continent, has more changes than the others. India was originally connected to Eurasia and Antarctica, then it separated from Antarctica and make a turn. At that time Himalayas could change form or be encreased, their shape has obvious bend.

So, there was a supercontinent on the Earth, composed of known continents. Only if we encrease the curvature of the Earth, we could connect the continents together. Empirically found the value of curvature shows that the Earth radius was smaller approximately 1.9 times.

This is also confirmed by the fact that the outlines of oceanic ridges repeat the contours of continents at a scale of 2:1. The continents could not increase, so the ridges could. The ridges were the junction of the continents. Now the size of the ridges shows us that the Earth has been increased approximately 2 times.

The enormous pressure, that occurs in the mantle at a high temperature, can not be ignored. It comes out in the weakest places of crust where the expanding of Earth is still continuing.

So, I believe that Pangea was a single continent which covered the entire surface of the Earth. Later this supercontinent was divided into the continents due to expanding of Earth. In its original form, the Earth was 2 times smaller.

Video version of the article

Artworks
I was inspired to paint the series of watercolors on this subject. Check out the gallery to learn more about this. 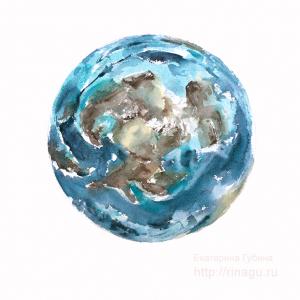 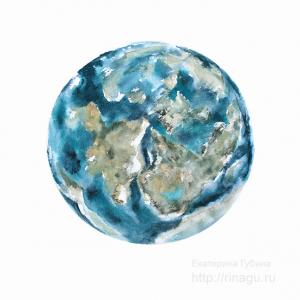